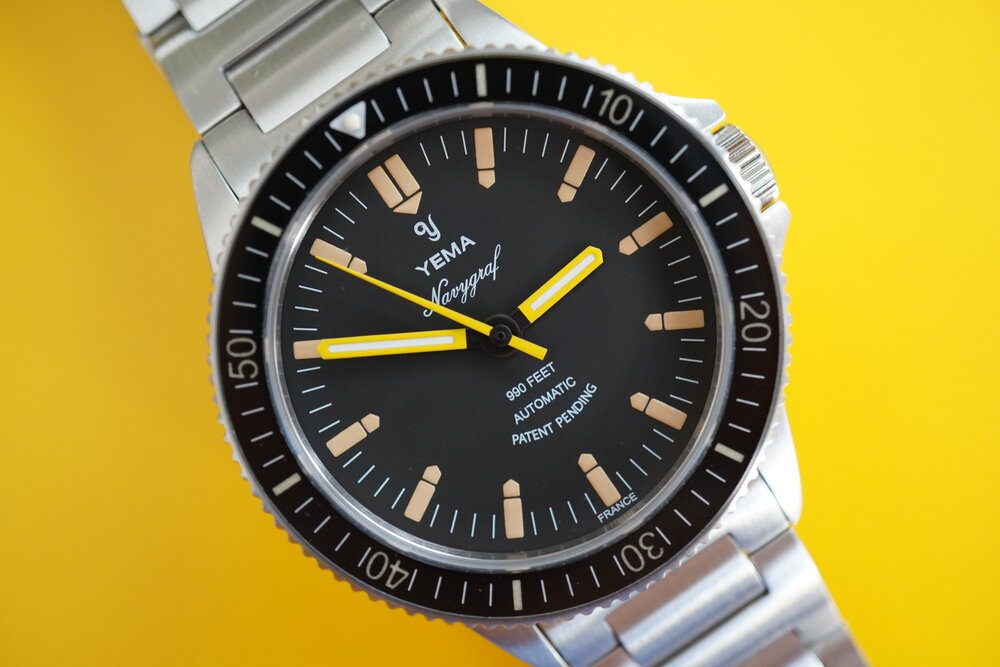 An accurate re-issue of a classic 1970s diver from a historically significant French watch brand.

Disclaimer: I purchased this watch pre-owned from a gentleman who takes excellent care of his watches. For all intents and purposes, this was a mint condition watch when I received it and I will review it as such.

I’m going to skip over the history lesson, and direct you to Yema’s official website for their story. But the gist is that Yema is undeniably a historically significant watch brand from France that started in 1948. It was eventually acquired by Seiko in 1988 and then made it’s way back to France in 2004, before being finally acquired by the Morteau-based Montres Ambre watch brand. We’ll be taking a look at one of their latest releases, the Yema Navygraf Heritage, a re-issue of their 1970s diver – the Navygraf.

I purchased this watch because of how accurately the new Yema managed to recreate the old Yema’s design (I know that sounds silly, but if you strip away the name, these are technically two different brands). This no-nonsense diver design is combined with a very elegant color palette and an intriguing “in-house” movement, the MBP1000. I’m not much of a movement snob (my first high-end timepiece was my ETA-based Tudor Black Bay that I have worn proudly for the last 5 years). That said, there is a romanticism associated with knowing that the beating heart of your watch is just that-much-more unique than it’s counterparts. Let’s take a pessimistic approach and talk about what this might mean:

That said, I’m willing to take the risk with all those above mentioned concerns. Why? For one, this is a sub-$700 dive watch that is already bringing plenty of value to the table with their very well made case and dial. Second, what is likely to happen in the worst case is that this movement is going to perform poorly and gain/lose a few more seconds a day than I would like (this actually wasn’t true, as you will see later on).

Another point of debate I’ve seen on the internet is in their use of the term “in-house”. A good point is often raised regarding “What fraction of this watch is made in country X?” and the same is asked of Yema’s MBP1000 movement. Yema quite clearly states on their website that the movement was designed and is assembled in Morteau. They make no claims regarding where the movement in manufactured. They also make no claims regarding where the rest of the watch is manufactured. We can confidently assume that these parts are being manufactured in the East. Is this a problem? Absolutely not. Some of the finest timepieces today are in some fraction manufactured in the East. Again, let’s not forget that this watch costs $700. A watch of this caliber that was designed, manufactured and assembled in France would definitely cost at least twice that. And would that make this a better watch? Arguably not.

This is the first thing that hits you. The Navygraf Heritage is extremely well made. The bezel is sold and the case is extremely well machined with fantastic brushed surfaces. I’m not a big fan of highly polished watches, particularly on watches that will see continuous use. Brushed metal finishing holds up very well against the occasional scuff and scratch, and this watch does exactly that. The bracelet is a point of contention for me – on one hand the links are fantastic in terms of quality and machining. Other reviewers have mentioned this too, and often comment on how perfectly uniform the polishing on each link is and I cannot disagree. The clasp is the weakest link (pun intended?) in this design and feels very cheap and mid-level Seiko-ish. But again, let’s not forget that this is in the same price-point of the mid-level Seikos that I’m comparing it to.

I’ve looked at this dial over a hundred times under my macro lens and it is quite impressive that they are able to deliver a watch with such tight tolerances for this price. I love the finishing on the dial including the faux-patina hour markers (which I’m told bear a phallic resemblance). The distinctive yellow hands on the high contrast black dial give this watch most of it’s character and I love it.

The watch ships with a beautiful brown leather carry case, that holds a small booklet and the warranty card. This makes a great storage option as well as an effective travel case. I can’t remember the last time Seiko shipped out a watch in much more than a $0.02 cardboard box. I’m a simple man, I need to be pampered.

I didn’t talk much about the bezel, but I like the simple bezel design with fully lumed indices. The lume isn’t very strong (ok, you win this round Seiko-holics) but is sufficient for reading the time without much effort. The bezel action is great and about exactly what you’d expect from a <$1000 watch.

Please treat these accuracy values with a few grains of salt. I used an iPhone app to graph this watch’s performance, which is obviously prone to error at multiple stages in this process. Let this just serve as a ballpark indicator of performance. The watch was running at around +4.5spd for the first 6 days and then started to wander into the +6.5 territory towards the end of the 10 day trial. Either way, I think these are well within expected tolerances for a $700 timepiece.

This watch is a great value proposition for anyone interested in a vintage inspired divers watch. This is a lot of watch for a relatively reasonable amount of money. In my opinion, watches such as the Navygraf Heritage and Baltic Aquascaphe may not ruffle too many feathers in the <$1000 range, but they are clearly punching way above their belt into the $1500 range such as the Oris Aquis and Oris Diver 65 lineup. Having owned an Aquis and Diver65 as well as these two watches, it’s clear to me who the winners are (I don’t have the Aquis and Diver65 anymore, so go figure). For details regarding the technical specifications on this watch, check out the official website.