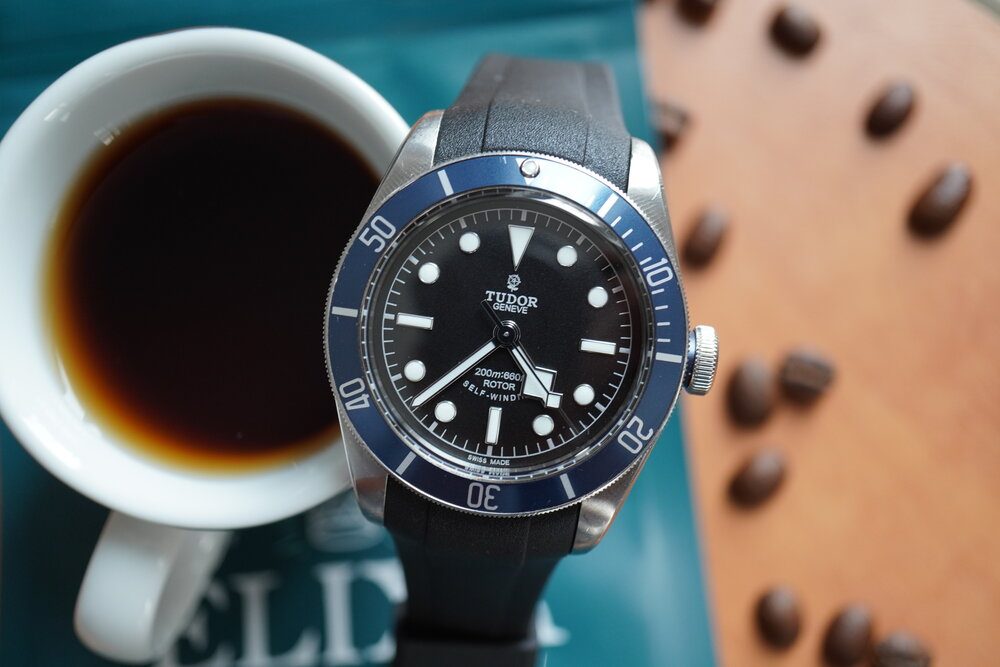 Disclaimer: I bought this watch and this review is in no way endorsed or sponsored by anybody. All these opinions are my own.

As a watch enthusiast, I find myself drawn towards brands such as Tudor primarily because of their story. They have a long history of building true-to-form tool watches, but it is impossible to talk about Tudor without drawing parallels to it’s bigger, more popular brother, Rolex. My hope, however, is to limit my discussion of Rolex and convince you that the Black Bay is a watch that is capable of standing on it’s own two feet (or lugs?). There are many in-depth articles regarding the history of Tudor and the origins of the Black Bay. You can find some here if you are interested – Tudor, Monochrome Watches and Hodinkee.

“For some years now, I have been considering the idea of making a watch that our agents could sell at a more modest price than our Rolex watches, and yet one that would attain the standard of dependability for which Rolex is famous. I decided to form a separate company, with the object of making and marketing this new watch. It is called the TUDOR watch company.” – Hans Wilsdorf

I often hear the argument that best reason to buy a Tudor is because it is the closest you’ll get to a Rolex without paying Rolex amounts of money for a watch. I’m here to tell you that the best reason to buy a Tudor is because it’s a Tudor. No doubt borrowing heavily from it’s big brother, Tudor released stellar time pieces such as the Ref. 7922, Ref 7923 and Ref. 7924 Big Crown Submariner – the direct ancestor of today’s Black Bay. These watches were very popular among the diving community because of their ‘accessible prices’ and overall robustness. They had similar success with their predecessor dive watches and Tudor quickly proved itself as a heavy hitter in the dive watch arena. So I say “Why not Tudor?”. Tudor might have been born as a brand designed to take money from those unwilling or unable to pay Rolex prices, but these dive watches have spent the last 66 years (the Ref. 7922 was released in 1954) proving that they are fully capable of being their own brand with their own identity. To put that into perspective, the Rolex Submariner as we know it today was also released that same year.

Five years ago, I purchased my Tudor Black Bay Blue (ETA) after graduating from college, and this watch has rarely left my wrist over this time period. Back then I didn’t fully understand the brand’s history or what a terrific timepiece I was about to own. Since then I’ve come to realize that any other purchase at the time wouldn’t have come close and I’m grateful to have made this decision (I was considering similarly priced watches from Oris, Union Glashütte, Mühle Glashütte and Alpina).

Before owning this watch, I was only exposed to a different tier of watches – my previous watch was a Seiko Kinetic Perpetual, and a Tissot PR200 before that. The Black Bay was my first mechanical (automatic) watch and it blew me away. The attention to detail on this watch was phenomenal. Plenty of macro shots of the dial and no dust or glaring imperfections to be seen; a terrific bezel with minimum back-play and a buttery smooth clasp that seemed to have been machined to perfection. That said, this watch was no delicate beauty. It felt solid from the get-go and never for a moment did I think to myself “Will doing X harm my watch in any way?”. Those that own one or have tried one on will know what I’m talking about. You can throw your life at this watch and it will barely flinch. Let’s be clear, I’m not an outdoorsy, adventurous adrenaline junky. I’m a Robotics Engineer on my best day and a couch-bound coffee snob on my worst, but I take comfort in the fact that my watch isn’t something I need to worry about while clumsily going about my day.

From the pictures below it is clear that this watch has taken quite a few beatings over the last five years. An unfortunate dive into sea water (and a few more after) left the original leather strap in a pretty bad state. However, the leather strap was absolutely gorgeous and made an extremely versatile combination that could be dressed up or down with ease. Eventually the strap came apart and I switched it to the NATO. The NATO strap is very comfortable and sporty – for those that don’t know, the manufacturer of the Tudor NATO fabric also weaves for the Vatican. I think that’s a pretty damn cool story, if nothing else. I eventually decided to get a rubber strap from Rubber B earlier this year and have been using it since. The rubber strap is well made and specifically designed for the Black Bay, which means that it fits the watch dimensions perfectly.

One of the features that draws me towards watches like the Black Bay and Submariner is that there is still a sense of rugged brutalist design inspiration in the case. The opposite of something like a Grand Seiko, which has polished surfaces all over without any sharp edges. This tool-watch attitude is what makes me put this watch on my wrist, without a shadow of a doubt that it can take whatever I throw at it. There is plenty of wear on the case and bezel, that I have carefully (carelessly?) accumulated over the years. Nicks, dents, scratches, scuffs… you name it, it’s got it. I look at the watch today and it makes me happy to see this; the kind of satisfaction you get when looking at your odometer after a long journey.

Let’s address the Tudor lineup of today. Unfortunately, the “rose logo” ETA version of this watch (that I own) was discontinued to make way for Tudor’s “shield logo” in-house (Kenissi) movement based watch. A friend of mine liked my Tudor so much that he bought himself one with the in-house movement a few years ago. Having access to both these watches, let me put a few things into perspective as I’m tired of seeing the endless discussions regarding these watches:

So far I’ve painted a very pretty picture for Tudor and for the Black Bay in general. And with a community of watch nerds all worshiping this brand and watch the way I do, what concerns me now should came as no surprise to anyone. Over the last five years, I’ve seen amazing communities of watch enthusiasts grow to accept and love the Tudor brand. I am part of many of these watch communities, and we just can’t shut up about how much we love our Tudors – Watch Enthusiasts India, Tudor Watch Club, Tudoraholics, Diver’s Watches and many more!

It’s no surprise that Tudor watch sales have drastically increased over the last five years, with Tudor having to churn out more and more watches to meet the demand. However, recent incidents might hint at Tudor’s inability to meet their original guarantees for quality control at this rate of production.

While some lemons are always bound to slip through the QC cracks, I personally think that Tudor needs to up their game in the QC department if they want to sustain their rapidly growing fan-base.

As I mentioned earlier, the watch wears nicely on my wrist. Together with the rubber strap it sits very snug and wraps around the wrist almost perfectly. Personally, I think the Rolex Explorer-I is the most comfortable watch I’ve ever worn. I’ve also found the Baltic Aquascaphe to be a surprisingly comfortable watch (on the beads of rice bracelet). The Tudor sits fine on my 6.25” wrist, but I’d be lying if I said this is the most ergonomic case design.